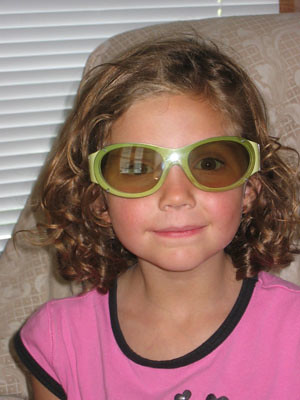 Last Saturday was Grace’s birthday party. We had a bowling party at Mardi Gras bowling lanes. These days bowling for kids, and especially at a birthday party, is about some many other things than bowling. There is a video screen showing music videos of things like Crazy Frog (video), which started as a UK ringtone and became known as the most annoying thing in the world. This means plenty of dancing from our gathering of 1st grade girls (and two boys).

Birthday parties also have a DJ/MC. He incites the kids and gets them to run away from the lanes towards his corner location. He asks trivia questions so he can away free bowling games. Some kids had 3 or 4 free games clutched in their hands. Anything to get the kids to come back with their paying parents. He also encourages to run around and scream at the top of their lungs. This is why you have birthday parties in locations other than your home. 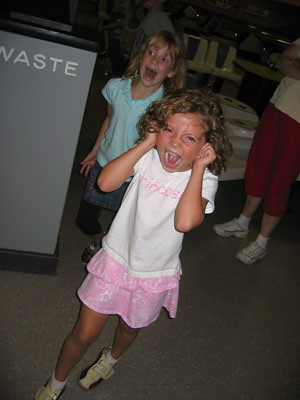 Our time in the party room was spent eating Spiderman cake and opening presents. This is quite a change, and a quick one at that, from a kid who had a royal ball party for 4 to have a Spiderman Bowling Party at 6. We opened plenty of presents from the kids in attendance. 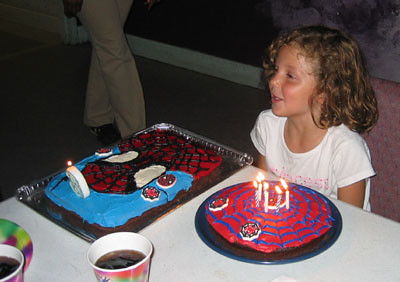 That night we went out to dinner with my folks at the Bonefish Grill for Grace’s birthday dinner. He had been going to Kanki, a Japanese steak house where they patchki on the table, for years for birthday dinners, but we wanted to avoid sodium overload this year.

Meg made cookies for Grace’s class and ate lunch in the cafeteria with her. Her jumprope team sang her Happy Birthday during practice. And finally we had another dinner (at Aunt Kathy’s), another cake (ice cream cake from Cold Stone) and more presents (including a Spiderman motorcycle and a robot from Radio Shack).