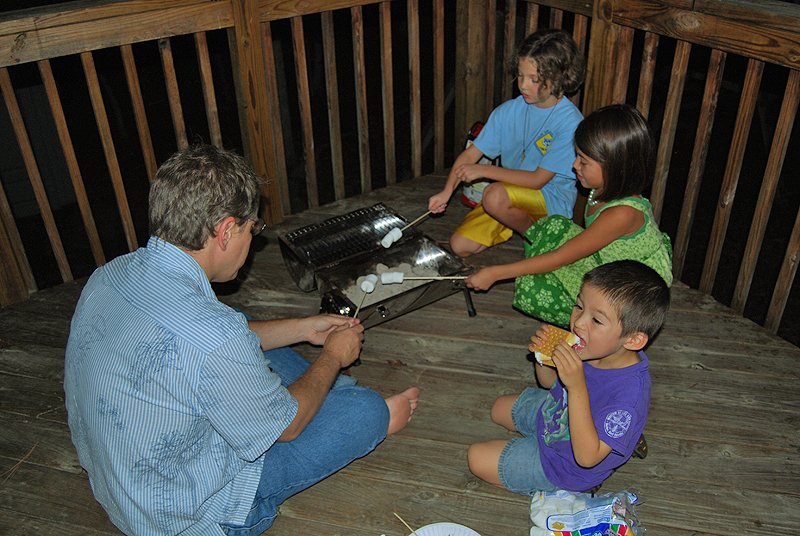 We had friends over for dinner and I planned on cooking steaks on the grill. Yes, the small grill pictured in the corner. It turns out that one of my friends is a vegetarian, and I had no idea. Grace and his daughter went to day care together, so I have known them for years, but I didn’t realize he did not partake of the cow. I was saved by the freezer (spanikopita and veggie breakfast links), so that was fine. I never grilled breakfast sausage before, but it worked out okay. I am sure they were fine, but I didn’t try them. The steaks were a big hit with all the kids.

Rather than stick with the brownies that Grace and I made, we decided that S’mores would be a better dessert. Especially since we had hot coals. Marshmallows, chocolate bars and graham crackers were purchased and the kids commenced to roasting marshmallows. This never works out well with little kids. Either the marshmallows catch on fire, fall in the ashes or don’t cook at all. There is a lot of pressure on a kid when your dad’s an engineer (my friend) and he wants you to roast a perfect marshmallow. Even though I normally burn mine, which actually adds a bit of extra flavor to S’mores, I mustered the patience to gently roast it to a golden brown. It gave me a great sense of satisfaction, but didn’t make my S’more any better. And the kids didn’t care at all.

Peter, always one to be different, made his S’more with the aforementioned brownies rather than a chocolate bar. It made a very thick sandwich. 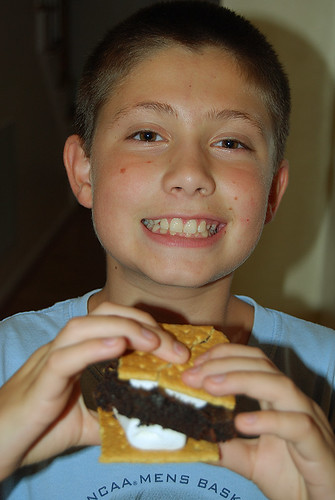