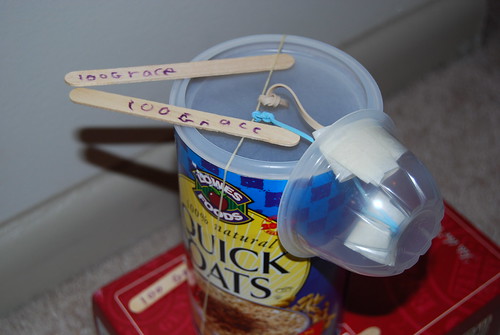 Yesterday when I picked up Peter from afterschool (Grace was at jumprope practice), two of Grace’s friends came running over and gave me the above project. Grace wanted us to give this to you, they both said. She wants you to take it home. There was also a note in Peter’s cubby.

We brought it home, having no idea what it was.

Grace told me that it was her musical instrument she made in science lab. It’s called 100 Grace.

Because it does a lot of things, she said, She took the two sticks and showed me that you can hit the top, hit the side, hit the cup on the side, and you can even strum the rubber band on top.

I know, she said. But that was just what I wanted to name it.