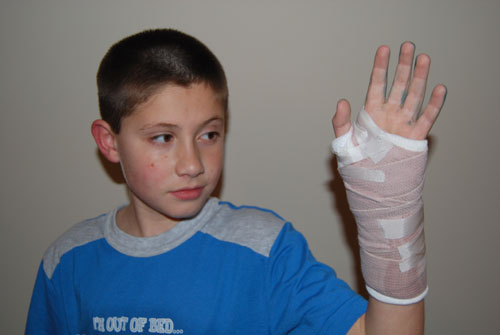 Today Peter fell off a swing at afterschool and hurt his wrist. After picking up the kids and some dinner, we came home and he didn’t want to eat. His lemonade had ice (not how we ordered it) and his burger had mayonnaise and ketchup (again, not how we ordered it). He seemed very upset about it. I looked at his wrist again and tried to move it. He was in a great deal of discomfort.

As recommended by the pediatrician’s office, we went straight to the orthopedic doctor. Why pay for urgent care twice since the peds don’t have an x-ray machine. So Peter got x-rays, and the doctor said he was unsure about one spot on the x-rays. He thought it could be a fracture, but he wasn’t sure. He poked and prodded Peter’s arm and wrist a little bit and asked him to make a fist (which he could not do). He asked Peter to point to the spot where it hurt worst of all. Peter pointed to the inconclusive spot from the x-ray. Diagnosis was fracture. I didn’t ask specifically what bone, so I don’t know if we should say broken wrist or broken arm. We can find out when he goes back for his cast.

The nurse put a plaster splint on Peter’s left arm. This keeps it secure, even if it swells. In three days, after any swelling has gone down they will put a cast. And we will spend the next month with a child in a cast.