Photo by Josh Hofer, part of the Triangle Tweetup Photobooth

Thursday night was the latest Triangle Tweetup, a gathering of local people who use Twitter. The above picture shows 4 of the 5 people who attended the first Triangle Tweetup in December 2007 (me, @waynesutton, @therab, @ginnyskal). As we prepared for this Tweetup, I noticed that lots of new people were tweeting about the event. I sensed that it would be big.

I arrived early and helped Wayne Sutton and Kipp Bodnar decide what to do about the chairs. I predicted over a hundred people would show up, and there were just a handful of chairs. We wound up moving the chairs to the side, leaving most of the space in front of the speakers open for standing.

People started arriving around 6:45 for a 7:00 event. There were lots of faces that I didn’t recognize. Twitter has been growing and our little community of users in the Triangle is growing along with it. One of the reasons for the event was to help new users learn how to use Twitter more effectively, whether for business or pleasure. I was one of the scheduled speakers for the evening, so it was important for me to understand how many newbies were in the crowd. I was planning on sharing my blogs and video projects in a way that would let me pass on some Twitter tips. No presentation to change if I needed to adjust my words. All I required was a browser.

As 7:00 rolled around, people were still streaming in the door. I was starting to get a little overwhelmed. Not from a crowd point of view, or even nervous about speaking, but from a people and connections point of view. There have been loads of people I have met over the past year that I see at these regular social media gatherings. I like to catch up and chat with them a bit. We may keep up on Twitter or through our blogs, but these friendships are stronger when you meet in person, or IRL, shorthand for in real life. And I just didn’t know if I would have a chance to talk to them all.

In addition to people I knew, there were also people I wanted to meet. These are people the I have begun communicating with recently, but have never met. I might have even started in past few days as they said they were coming to the Tweetup. And there were probably even some people who wanted to meet me. Since I was on the agenda as a speaker, they might have figured I knew something about Twitter. That part is true. 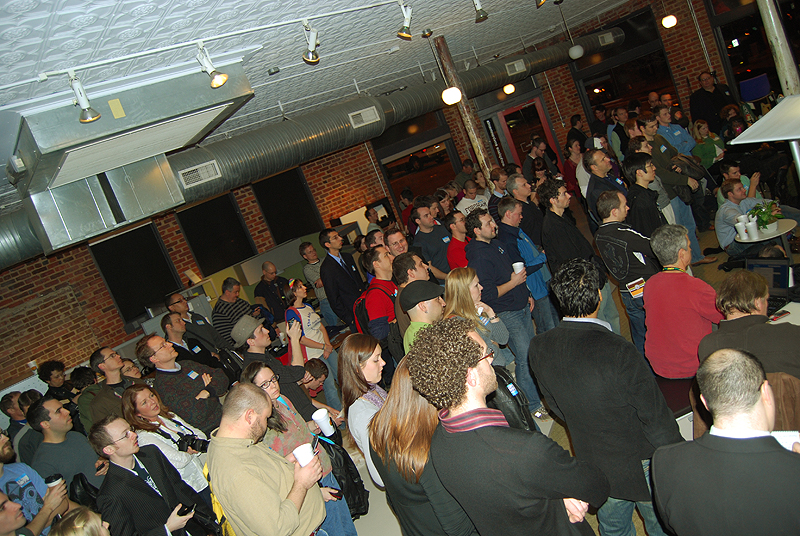 The event began and I moved through the crowd, taking pictures and stopping to chat with friends. It was such a big crowd that I had trouble finding a vantage point to capture it. The above photo shows part of it, but there were many more people who don’t show up in this view.

It was finally time for me to present and that was a blast. I knew what I wanted to say. I had an order to click through my blogs. And I think it went pretty well. I wasn’t nervous trying to talk to all those people. It was good practice for me presenting to a crowd. I need to do more of it. I also managed to video tape the crowd wishing the Triangle Tweeple Team good luck in the Krispy Kreme Challenge.

And finally, I met some new people that I will continue to tweet with, until the next tweetup when I will go expecting to see them. And if I didn’t get a chance to meet you, contact me through here or Twitter. We can grab a cup of coffee and I can find out what you are up to. I would be happy to give you a few tips about Twitter too.