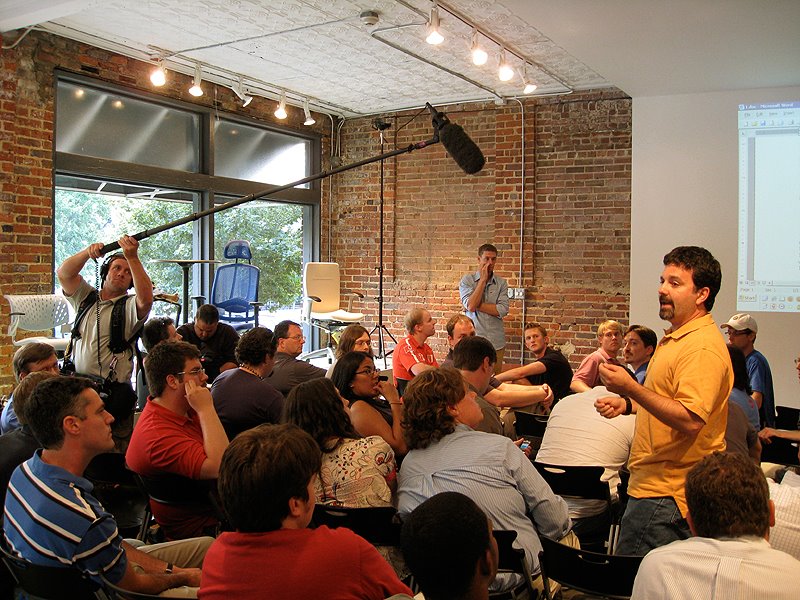 Photo of my pitch by Taylor Davidson

Day 1: The Pitch
Over 50 people arrived at the Edge Office in the Glenwood South district of Raleigh starting at 6pm. After around an hour of mingling and light snacking we gathered in the folding chair area. It was time to pitch our ideas. Game on.

There were about 25 ideas pitched for startups. Each needed to be doable in a weekend with the resources available. The pitches focused on web, or mobile, based ideas that could be coded in languages the could easily be deployed. Nobody pitched any product based companies that required manufacturing facilities. Notice the rapt attention on my pitch? My idea of a mobile gametracker application for sports that is subscribable in a variety of ways was fraught with legal and licensing issues. I never made it to the lightning round.

After voting down to about 5 or six ideas, we divided into teams. I joined the team that was going to create a mobile application to allow people to instantly comment on their customer experience. James had this idea after going through a drive-thru and getting cold fries. He didn’t want to drive back to the restaurant, but if he had an easy way to tell the company, he would. Since the idea was based on a fast food drive-thru experience, we called the company My Fries Suck. Since I came up with the name, I became Director of Marketing. We brainstormed through lots of details Friday night, including creating a basic paper prototype of the site. We left around 11pm, having established the core programming tasks required over the next two days. 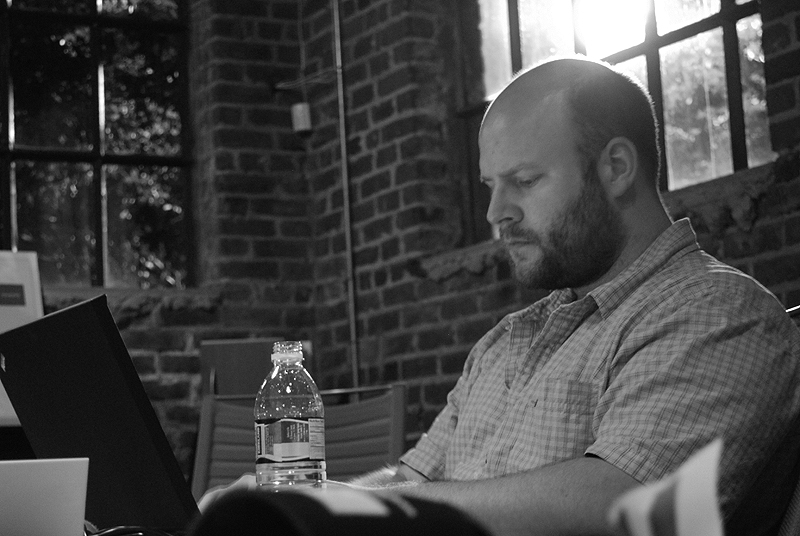 Photo of Bars for Us team member, Jay Cuthrell, by me

Everyone returned the following morning around 9-9:30 and met with their groups, that would soon be companies. There was some attrition overnight, but those who returned were ready for the task at hand. Our team of James Avery, Derick Hitchcock, John Martin , Sean McCarthy, Fred Medlin, Curtis Mitchell, Brian Russell, Dustin Tsang, Caleb Wright, had their assignments from the night before. We had programmers working on the front end, the back end, the server setup and the mobile application. We had a writer working on things like FAQs and error messages. I was signing up for social networks as MyFriesSuck, so we could begin planning our social media marketing campaign. It wreaked havoc on my own accounts with these social networks. I would post a message as MyFriesSuck, log out, log in as me, and post it again as me.

My favorite social network moment of the weekend occurred after we all shared contact information (twitter, blogs, email, phone). People started looking at each other’s blogs, and both James and Curtis commented on my recent blog post about the muffins I made, and wondered if I had brought any with me.

Our marketing team, not working anywhere near as hard as the coders, created a logo and a tag line (Tell them what you think… Now!), and designed a splash page to put up at www.MyFriesSuck.com, which was registered the night before. As the developers continued coding (and not updating me as to what they were doing, since I really wouldn’t understand what they were doing on a detail level), we launched version 2 of the logo and a second splash page. I needed to go back to the social networks and change the profile photos to replace the original logo with the new one.

In the late afternoon before dinner, we recorded 60 second elevator pitches that we posted on line, and uploaded to the CrunchBase web site. This would allow the world to view our pitches. I already posted mine here.

The other three companies were forming throughout the day, and the twitter activity was fast and furious. We also had a CNBC film crew with us the whole weekend. The expected buzz from RTP Startup Weekend online and on television created added pressure on people who were already trying to launch a company in 2 and half days.

Here are the other companies:

Dealcastr.com
DealCastr solves a unique problem; local businesses have things they want to get rid of QUICK. Like hockey tickets for tonight’s game. Tomorrow, they’re worth nothing. How much would they sell for today just hours before the game?… The only way to find out about these special deals is with DealCastr. Choose the deals you want; DealCastr sends the deal to your mobile phone or email.

BarsforUs.com
Take the guesswork out of finding Raleigh’s best bars. Bars For Us, at barsforus.com, has created an easy way for people to find bars using the criteria most important to them. Bar listings are displayed on a map and change dynamically as people refine their search.

Our team continued to work late in the evening, getting the web app working and making progress on the Windows Mobile app. By around 11 they broke for the evening. After they left Michael Kimsal brought us some fries. Not only were they great, but they were prominently featured in this mashup video of two startup companies (MyFriesSuck and Scavanja):

After barging my way into that video with my fries, I went out with some of the folks from Scavanja. I left Raleigh after 1am. 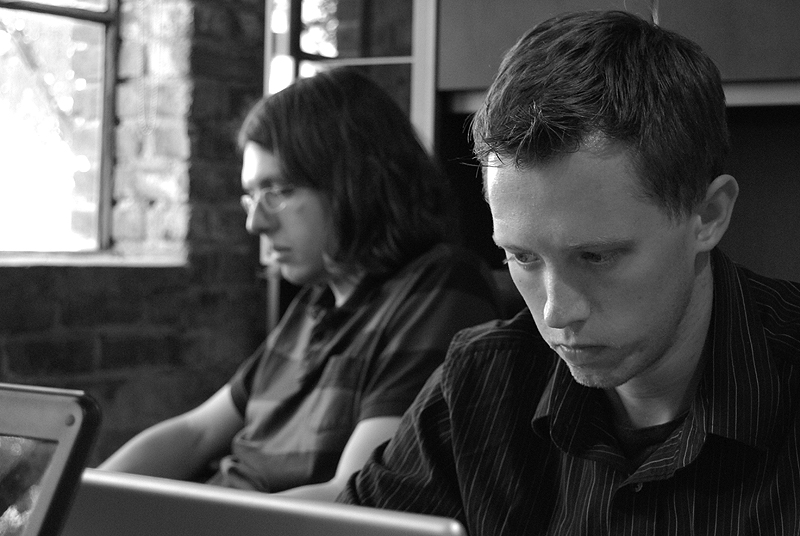 Photo of Scavenja team members, Adam Arney and Brandon Burke, by me

Sunday morning was another day of coding for our development team. Our web application was optimized for the iphone. Our Windows Mobile programmer did not show up, so we would only be demoing the web version of the application, in a browser and in an iphone simulator.

This was media day for me, as I prepared a statement for RTP Startup weekend press release. I also met with Jonathan Cox, reporter from the News & Observer. In preparation for this interview I asked John, the technical writer on our team to find a couple of industry statistics for me. He found that the Fast Food Restaurant industry has an annual revenue of about $120 billion (source: MarketResearch.com, 2008). And according to the NPD Group, a research company that tracks the food industry, a whopping 77% of all meals bought in the U.S. are purchased at what’s called a “quick-service restaurant.” That’s up from 73% in 1994. You check out John’s blog for the details that I forgot, since it has taken me a few days to complete this post (Day 1, Day 2, Day 3).

There was a lot of pressure all day as the teams worked furiously to finish their code. I stayed out of our team’s way. I worked on Bios for the team members and took pictures for the site. Early in the day, we thought this would go up Sunday, but as the day progressed, it was decided that there wasn’t time to get to it.

Around 6:30, we made our presentations, and launched 4 companies. Our team went first, and James did a great job showing off our application. We got a lot accomplished in a weekend, and developed an idea that could grow into a company. MyFriesSuck is a fun application of mobile technology, that appeals to a demographic of young, tech-savvy folks who live in a social networked world where it is common, even expected, to provide feedback. They provide that feedback with the expectation that their opinion is important and can actually cause change. However, the part of the idea that has legs is the creation of a customizable mobile platform for gathering customer experience data at the point of experience.

Here are all the presentations:

And finally, the weekend awards:

Best use of Social Media:

This was a great weekend, and lots of fun. I made lots of new local connections, and we are all excited about what the future holds for our new companies.

Links
I took lots of pictures throughout the weekend. Here is a link to my Flickr photos from the whole weekend. If you were at RTP Startup Weekend, tag any photos that you are in. Use any photos you like on the web, but just give me a link back to here or to Flckr.

Here’s a link to the Social Media Press Release, which includes all the Elevator pitches.