This past week was Triangle Tech Week (search #tritech), where we had social media or technology events every day this week in the Triangle region (Raleigh, Durham, Chapel Hill) of North Carolina. It was a long week, and considering that me and my OurHashtag partners planned several of them, I have been resting and recovering today. The following tweet from @theRab lists all the events. He worked very hard to get six events listed in 140 characters. He was very proud of the tweet and other retweeted it.

While the last Triangle Tweetup (search #triangletweetup) had over 250 people, we had a “flash” Triangle Tweetup to kick off the week at Edge Office in Glenwood South in Downtown Raleigh. We announced it Monday morning.

We started by congratulating Jazzy Chad on his new gig with Twitter. Don’t worry, he’s staying in Raleigh, and will be helping them out part-time. According to this blog post, Chad was such an integral part of the Twitter community in both his creation of Tweetgrid and his customer support, that Twitter took notice.

We talked about the use of professional tools for Twitter. We discussed the features and benefits of CoTweet, HootSuite, TweetGrid and Seismic. We talked about how these different tools allow organizations to manage incoming and outgoing tweets for customer service, and how to implement that into a business workflow. 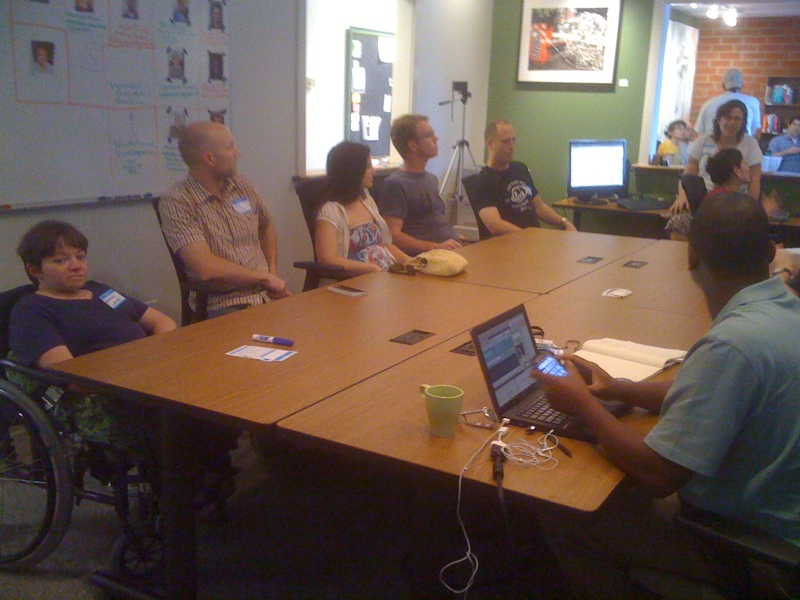 On Tuesday, we gathered at Carrboro Creative Coworking for the first Westend Tweetup (search #westendtweetup). This gathering of Chapel Hill/Carrboro Twitter users and those looking to learn more about Twitter was organized by Greg deLima. Wayne Sutton led a discussion based on a Twitter presentation he gave 2 years ago. It was interesting to see that much about the Twitter world had not changed. An awful lot of the infrastructure of the platform and core users were in place at that time. Sure, some logos had changed, many more tools are available to interface with Twitter, but the principles of building a following and engaging have not changed. 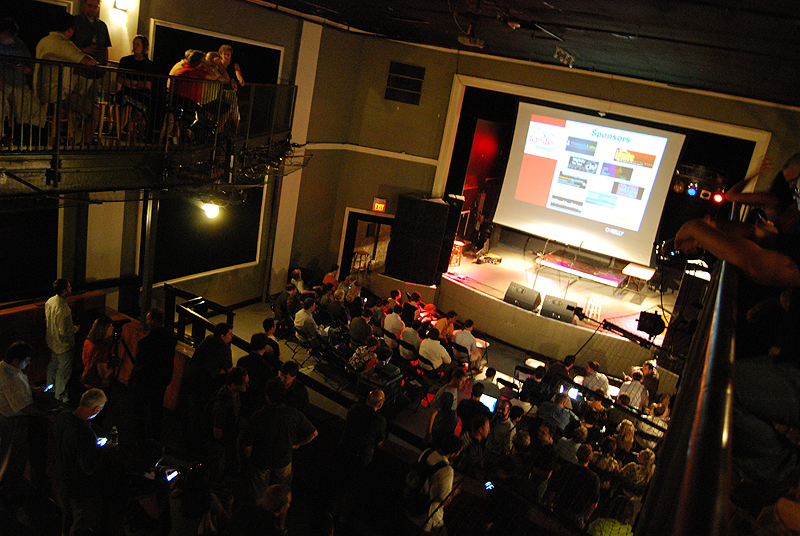 Our big event for the week was Ignite Raleigh, and we had approximately 500 people join us at the Lincoln Theatre in downtown Raleigh. Ignite events happen all over the world and they are about sharing ideas in a simple format. The tag line is “Enlighten us, but make it quick.” Each presenter gets 5 minutes and 20 slides to share their ideas. And the slides automatically advance every 15 seconds. 10 speakers were chosen by the community through an open voting process, and 5 speakers were selected by the organizers. We asked Zach Ward of DSI Comedy Theater in Carrboro to MC, and he did a fabulous job. 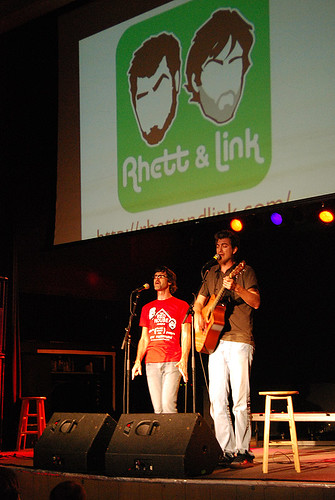 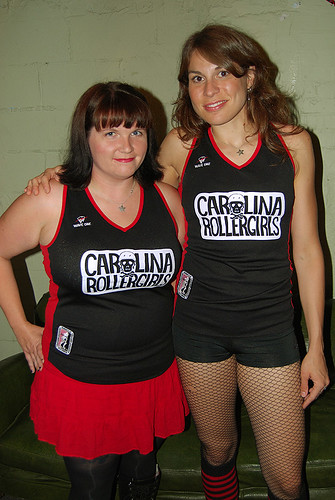 The Carolina Rollergirls helped us out by introducing the sponsor commercials and announcing the door prize winners. They did not skate around, but they did chase a few people around.

As organizers, there are certainly some things we could have done better, as there always are, but overall the event was a great success. Everyone seemed leave entertained, inspired and in an upbeat mood. Sounds like a success to me. We are already planning the next Ignite. 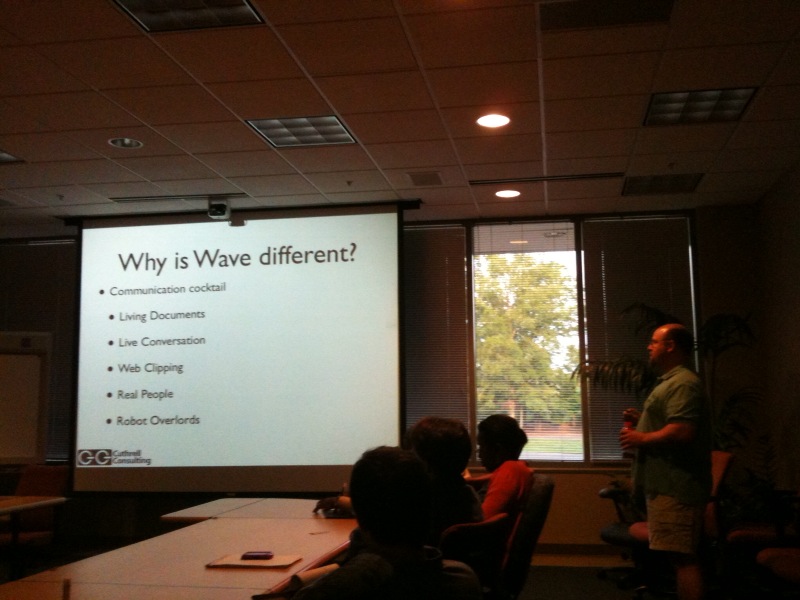 On Thursday we hosted a Triangle Social Club at iContact in Durham which featured a demo of Google Wave by Jay Cuthrell. Jay attended the Google Wave announcement event and has been using the Dev Preview of Google’s new development platform that will bring email, documents and collaboration together. An ongoing thread or conversation is called a wave, and new information is tracked as it is added to the wave, so someone can view later everything that was contributed in the order it was added. We also heard about bots that can be added to waves with stupid names like spelly and linky. There are also annoying bots that convert a wave to pirate speak or show everything in comic speech balloons. Here’s Jay’s presentation, but the real interest of the meeting was in seeing wave in action.

The night before BarcampRDU there is a traditional gathering for beer. This year was no exception and it occurred at Raleigh’s Flying Saucer.

This was my first year attending BarcampRDU. My schedule had never worked out previously, but I also always thought it was too technical. There was a big development crowd there, but I attended sessions on marketing, startups, Google Wave (presented by a guy from Google who is based in Chapel Hill), and a Geek Dad one. I also lead a session titled “Potpourri for $500,” which I will discuss in a separate post. A big shoutout to Dave Johnson and all the other organizers and volunteers for a great unconference. 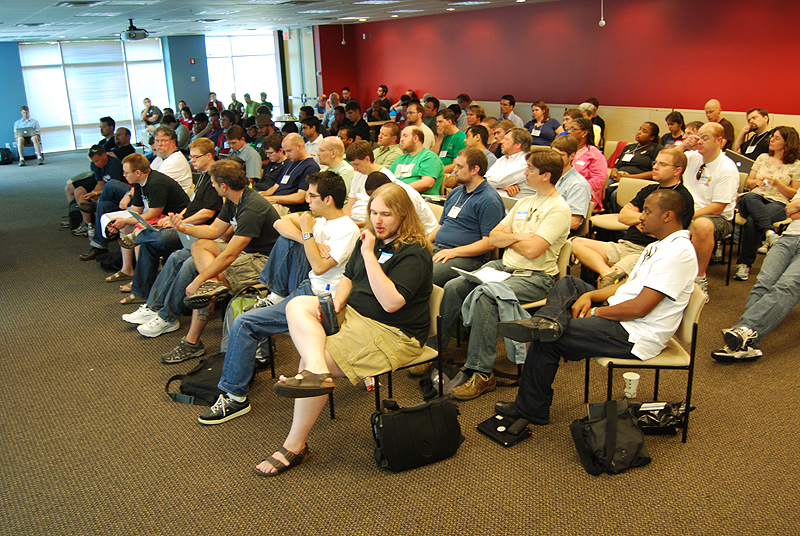 The crowd learning about Google Wave 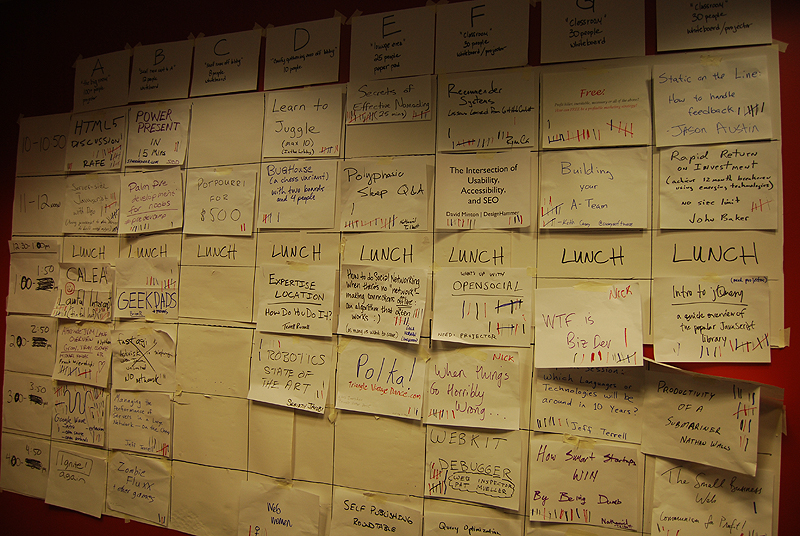 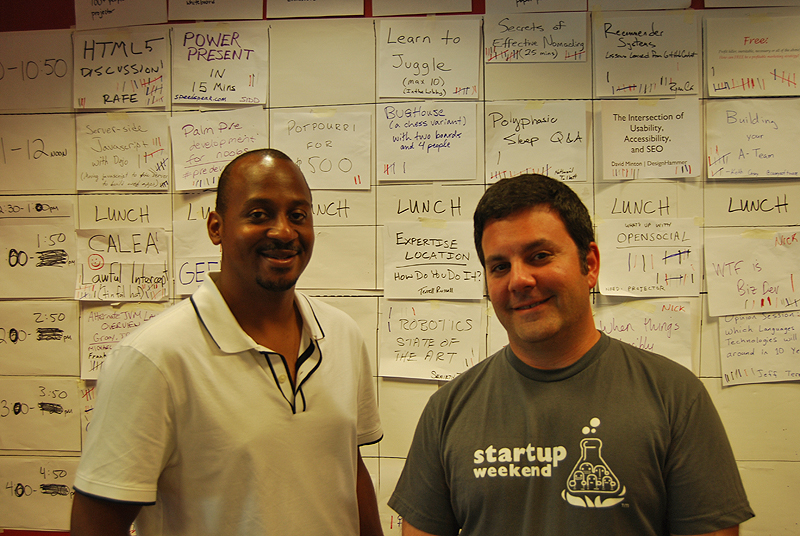 The last men standing. Wayne and I were the only ones who attended all 6 events of Triangle Tech Week and we were exhausted. If anyone else had joined us at all 6 events and appeared in this photo, they would have received a prize. Since we would be the ones presenting the prize, we did not bother giving it to ourselves.

If you attended any of the events of Triangle Tech Week, or even just followed them online, we hope you met some new people, learned some new things and were inspired by the community here in North Carolina’s Triangle.