Yesterday evening I went to the latest Triangle Tweetup in Durham. This event of local people connected through Twitter was held at iContact. It was nice that the event on this side of the Triangle. It was smaller group than last time, but it was still nice to see friends from my social media circle. The interesting part of the event was that we were connected via a video stream to an Atlanta Entrepreneurs Group and Robert Scoble. He is one of the Twitter celebrities. He is following over 21,000 people and often answers the question, how do you follow so many. He scans tweets quickly and determines that most are not useful to him. He views Twitter as a big social experiment and he just follows along.

The Atlanta folks were all too new to Twitter to even have any questions, so the event was a bit light on interactivity. After we turned off the stream, we talked about other micro-blogging platforms. While people appreciate the open source model of identi.ca, because of the community on Twitter, no on has really latched on to other services. It will be interesting in the future to see what causes the mass of early adopters to move and follow their communities off Twitter. I was chastised a bit for using ping.fm to broadcast my updates to multiple platforms, and did not follow up by participating in their communities. I check Twitter frequently, and don’t check the others enough to warrant posting there. I guess I need to find a new way to update my status on Facebook. 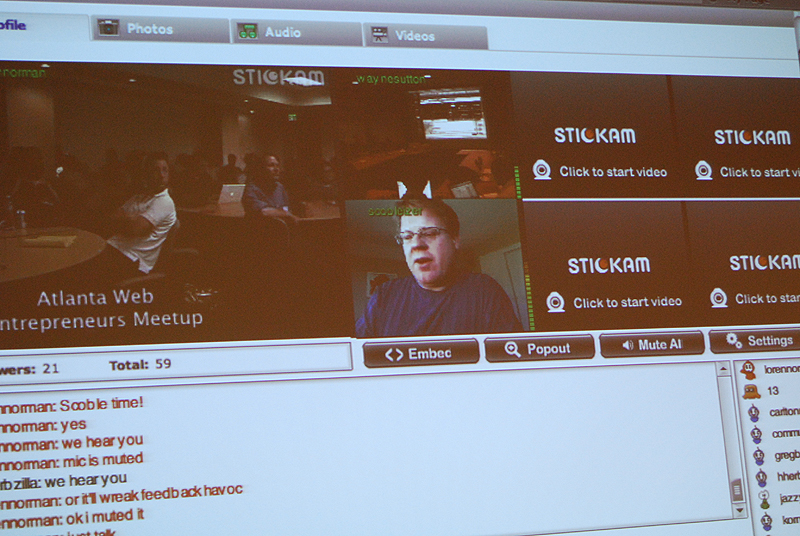 The rest of my photos are here on Flickr.