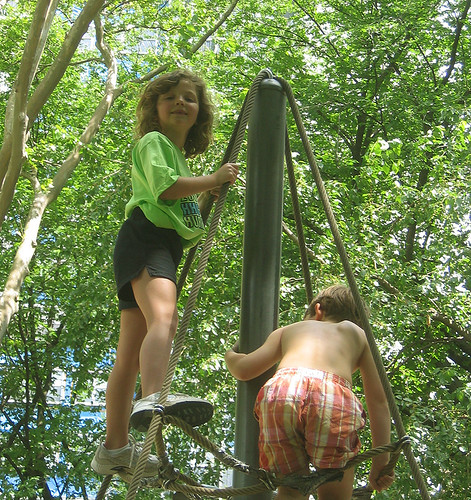 Reading this NY Times article about New York City playgrounds reminds me of unique experience from last summer. The above picture shows Grace on a climbing structure in a Central Park playground. It happens to be the playground at 72nd just inside the eastside of the park at Fifth Avenue. This is notable since this is the playground I frequented as a kid living in NYC.

When I was 10 years old I moved to the Upper Eastside of Manhattan. We were four long blocks (avenue to avenue) from Central Park. While we certainly did plenty of playing on the sidewalks outside our apartment building, if we wanted a playgound or a grassy field or even wide open space, Central Park was the place we went. A playground still held the interest of a 10 year old in 1975, so this was my playground.

I moved around a fair amount when I was growing up, and my kids have not had much opportunity to visit any of my child haunts. Last summer on trip to New York we spent time in Central Park. We happened by this playground and Grace wanted to play. The rope structure she is on was not there in the 1970s, but the general layout of concrete structures and slides was the same. And it was a pretty unique experience for me to see Grace play on a playground that was mine as a kid.