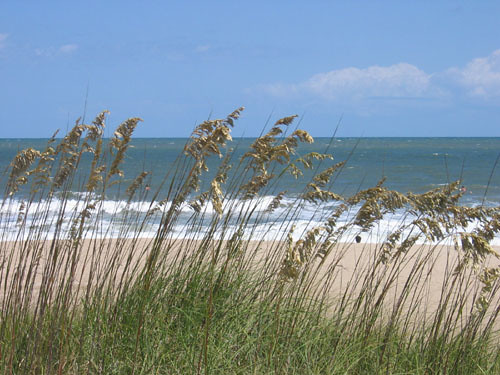 After sleeping late again, we had breakfast on the deck. It is great to be staying in an oceanfront condo. Seeing the crashing waves and feeling the ocean breezes are great additions to the morning menu.

The kids and I went out to the beach and played in the surf until lunchtime. It was high tide and the waves were very rough with a strong undertow. I told Peter the story from Garp about the Undertoad. We put up the boogie boards after Grace rolled over riding her brand new board. Peter was not interested in riding at all.

I stayed close to both of them, and when they got knocked down, I helped them up. After a little while Meg came out and we divided up and each of us watched a kid. She described her position as standing between Peter and Spain.

Grace spent a lot of time playing in the sand instead of playing in the water. When she was in the water, she yelled and cackled and generally carried on, since no one could hear her. The constant surf was pretty loud. She also referred to the water as chocolate milk, since it looks brown near the shore due to the sand.

After a restful afternoon of Animaniacs and naps, Grace and I went back out to the beach. The tide had gone out, and the water was calm. It was like a different beach.

For dinner, we went to Michael’s Seafood where I had peel ‘n’ eat shrimp with Old Bay seasoning. Yum. Peter also forced me to share his Death by Chocolate dessert. After dinner I hit the road and headed for home.

As I got on I-40 at its beginning, there is a sign saying “Barstow, California 2554 miles. Glad I wasn’t going that far.