I flew to Grand Rapids, Michigan for a business meeting. This is my first trip after the liquid ban. I, like many other of my fellow passengers, had to either check my luggage or not travel with toothpaste, shampoo, etc. This adds a little more hassle to the arrival (standing around waiting for luggage), but makes the boarding of a plane much easier. There just was not as many people cramming oversized rolling luggage into the overhead compartments. On each flight it was a breeze putting my laptop case in the bin.

Due to the foiled terrorist attacks in the UK, the terrorist level has escalated from yellow to orange. This is defined on the airport sign as a high probability of a terrorist attack. While that may be true in a general sense, it really is not true in every airport where they have posted these signs.

Over the weekend, several suspected terrorists were arrested and it was thought they had targeted the bridge connecting the Upper and Lower Peninsulas of Michigan. These Palestinian-Americans were from Texas and were riding around Michigan buying up pre-paid cell phones (there were reportedly 1000 in their van), and had pictures and video of the bridge.

All of these events made it an interesting time to fly to Michigan. 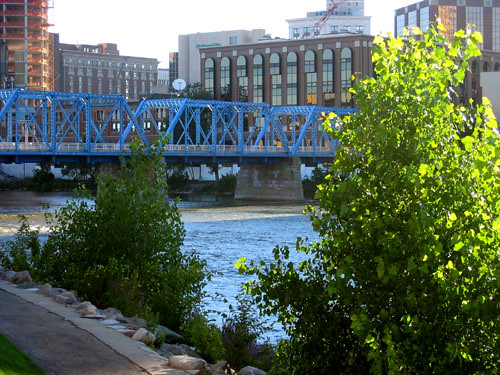