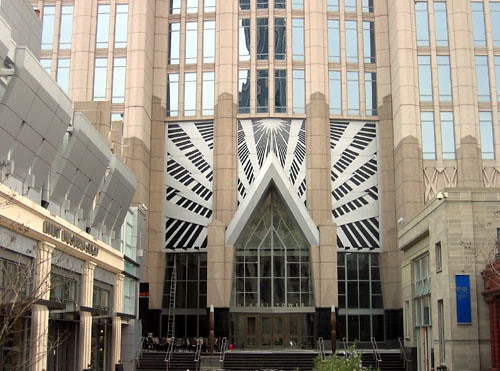 Meg and I took a trip to Charlotte, and we didn’t take the kids. It was nice to get away by ourselves. We planned to take the train, and make an excursion out of the trip. I planned a picnic dinner for the train ride down Friday night.

One of the problems with train travel is that Amtrak does not have priority on the rails. We arrived the Burlington station about 10 minutes before our 6:00 train. We were told that the train would be leaving at 7:45. It got hung up south of Richmond, as it had to make way for the freight trains that owned the tracks.

We ate our picnic dinner in the train station. I bought way too much food for two people, but it’s always nice to have variety. With no apologies to Tom Wolfe, we had southwestern turkey, black forest ham, genoa salami, Vermont cheddar cheese, goat cheese, a mini-baguette, ciabatta bread, red pepper pesto, cookies and bottled water.

After dinner and several games of Gin Rummy, the train finally arrived at 8:45. Some of the people on the train, which was now nearly 3 hours late, had been on the train since 7:00 in the morning when they left New York. This was not an excursion train. These were people who did not have another way to travel.

We were supposed meet friends in Uptown Charlotte when we got in, but we cancelled those plans since we were delayed so long. By the time we checked into our hotel, it was so late that we barely had time to go to the hotel bar for a drink and some chicken wings.

We slept late, which is a rarity in our lives, the next morning. After breakfast we went to Discovery Place, a science museum that is fun both with and without children. The visits happen at different speeds. While we were at the jelly bean exhibit, I bit into a jelly bean to do a tast experiment and a crown on my tooth came off. When I told Peter what had happen, he told me I was no longer king because I lost my crown.

Discovery Place has an IMAX Theater and we saw Hurricane on the Bayou, a movie made by the same people who made the Everest IMAX movie. They started making a movie about the erosion of the wetlands in the Louisiana delta and its effect on potential hurricanes. While they were in production, Katrina joined the party. They scrambled to get a crew to New Orleans in the aftermath of the storm. As harrowing as the pictures of the flood were on tv, they were unbelievable in IMAX. The devastation was too much.

We also went to the Mint Museum of Craft and Design. There were lots of very cool artwork on display, including a series of Mayberry sculptures commenting on modern issues, and a major exhibit on a German glass scultor, Ann Wolf.

Before boarding the train for our return Saturday evening, we stopped off at an Irish pub, RiRa, for a pint and bangers and mash for me and fish and chips for Meg.