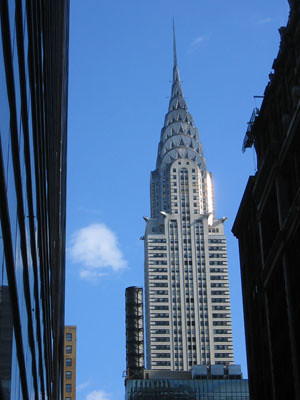 This past weekend I took a trip to New York City for a family event. It was a bit of a disjointed trip, so this post may seem to ramble a bit. It was the first time I traveled with carry-ons only for an overnight trip since the latest ban from the TSA. I went out to the drugstore to get pint-size, I mean 3-oz travel size, toiletries. I later asked on this trip how could I take anything other than a quick shower since I had small toiletries.

I spent Saturday at the re-opened Museum of Modern Art (MoMA). While much of the work was familiar, since I have been to the musuem many times over the years, there is always something new to see in great work. I continue to be in awe of Monet’s Water Lilies. And some works just have more power in person, like Jackson Pollock’s drip paintings and Van Gogh’s Starry Night. To be able to see the brush strokes up close is pretty cool.

It was a chilly morning, but the Sculture Garden is quite a respite from the city rising around it. 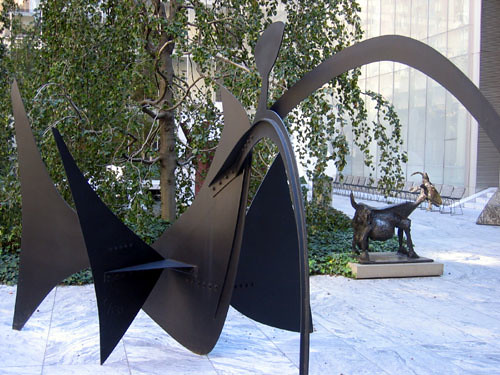 As I traveled around New York City, whether by taxi, train or on foot, I noticed that the city hasn’t really changed. While many things about the modern world have changed since I lived in New York (late 70s and early 90s), there is too much infrastucture in the city for it to change rapidly. Sure, every business has a web address printed on the door, but the streets and buildings are still the same. There is always lots of construction and many new buildings going up, but in general, it is still the same place.

I enjoyed a Sabrett Kosher hot dog from a street vendor. These are unlike any hot dogs in the world. Add mustard and onions (a unique concoction of cooked onions in a tomato based sauce) for a flavor that mixes memory with texture and taste. And I only dropped a couple onions on my pants as I walked and ate. I also had a Black and White cookie (another link), another NYC original.

I walked to Grand Central Station to take the train to my sister’s house. Even jaded New Yorkers were interested in the commercial they were filming in the cavernous station. Movie lights were everywhere, lighting up bits of the background, as well as two large balloon fill lights hanging overhead.

That night we had a good NY Italian meal and I spent some time with my nephews and niece. It was too bad my kids were unable to come, as they don’t get to see their cousins that often.

Sunday morning was the unveiling ceremony for my grandfather’s gravestone. Jewish traditions require a second trip to the cemetary to dedicate the carved gravestone. It is another time to hold the memory of your loved ones in your heart. As the rabbi said, through the memories of their life, the departed will live on. 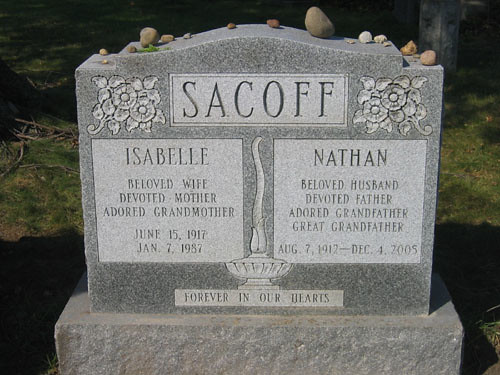 After the service, we gathered at Dougie’s, a Kosher barbeque restaurant for lunch before my flight home.